Mark your Calendar for this one! English Heritage, https://www.english-heritage.org.uk, is a charity that manages over 400 historic monuments, buildings and places throughout England, and this year the famous summer solstice at Stonehenge will stream live on English Heritage’s Facebook Page https://www.facebook.com/englishheritage at sunrise on Sunday morning, June 21st at 4:52 AM GMT (local time). That is Saturday, June 20th, 8:52 PM PDT here on the West Coast of America.

Click Here to go to English Heritage’s Facebook Page, and then look for the little red LIVE button. 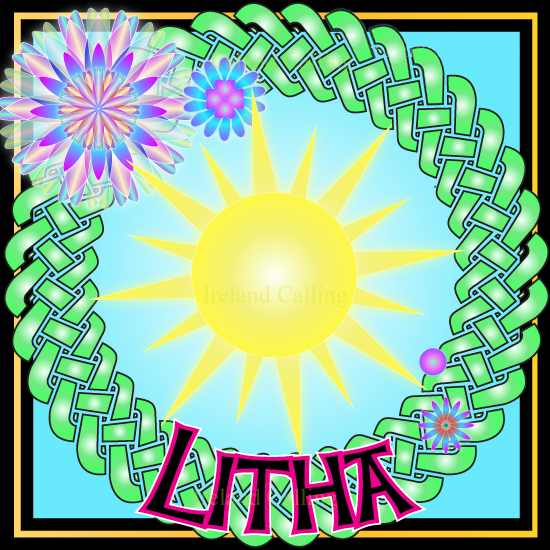 Midsummer is one of the four solar holidays celebrated by agricultural cultures throughout the Northern Hemisphere. It is the turning point at which summer reaches its height and the sun shines longest. Here are some brief descriptions of how some of the Celtic cultures celebrate this annual event.

Ireland
Many towns and cities have ‘Midsummer Carnivals‘ with fairs, concerts and fireworks either on or on the weekend nearest to Midsummer. In rural spots particularly the northwest, bonfires are lit on hilltops. This tradition harks back to pagan times and is now associated with “St. John’s Night“. After much initial upset in the west of Ireland, The Irish Environmental Protection Agency, created an exemption for the burning of bonfires outdoors during midsummer night. Traditionally the longest day of the year in Ireland falls on June 21.

Scotland
Midsummer festivals are celebrated throughout Scotland, notably in the Scottish Borders where Peebles holds its Beltane Week. The Eve of St. John has special magical significance and was used by Sir Walter Scott as the title, and theme, for a pseudo-ballad poem. He invented a legend in which the lady of Smailholm Tower, near Kelso, keeps vigil by the midnight fires three nights in a row (see above) and is visited by her lover; but when her husband returns from battle, she learns he slew that lover on the first night, and she has been entertained by a very physical ghost.

Wales
In Wales it is called Gwyl Ifan, or Gwyl Ifan Ganol Haf (St John’s of Midsummer) to distinguish it from Gwyl Ifan Ganol Gaeaf (St John’s of Midwinter, the feast of John the Evangelist). Great agricultural fairs used to be held at this time, along with merriment, dancing, and a bonfire. With the advent of non-conformist beliefs on the Welsh socio-political culture, this (among so many other similar festivals) suffered greatly, and its observance finally died out in south-east Wales by the end of the 19th century. However, since 1977, a folk-dance revival started in Cardiff, and is held now annually on this feast day.

Wiccan
Some Wiccan traditions call the festival Litha, a name occurring in Bede’s The Reckoning of Time, which preserves a list of the (then-obsolete) Anglo-Saxon names for the twelve months. Ærra Liða (first or preceding Liða) roughly corresponds to June in the Gregorian calendar. Bede writes that “Litha means gentle or navigable, because in both these months the calm breezes are gentle and they were wont to sail upon the smooth sea”.

A hundred years ago, and for many centuries before, Midsummer’s Eve was celebrated throughout Ireland on the 23 June, that is, on Saint John’s Eve. The bonfire was central to the activities of Midsummer’s Eve, and those who witnessed the flames more than a lifetime ago noted that the landscape was filled with hundreds of bonfires, creating a beautiful aspect by illuminating the country as far as the eye could see. These fires were lit on elevated sites including mountain tops and hills, but also in fields, at crossroads and on the streets and in squares of towns and villages throughout the country. In Dublin bonfires were outlawed by the Lord Mayor in the 1700’s, and as a substitute, the towns’ people attached candles to trees and bushes to maintain the tradition in some form. Gradually, during the nineteenth century, coercion bills eliminated bonfires from many towns and villages across Ireland. Bonfires in previous centuries fed on materials that could easily be obtained; in some areas straw, reeds and wood were collected throughout the whole six months leading up to Midsummer’s Eve, while in other areas the bonfire was principally made of turf, with every inhabitant of the village donating their own share to feed the bonfire. Well into the last century the ancient Irish tradition of burning animal bones continued, some believe in imitation of ancient sacrifices, in certain parts of Munster and Connaught, the addition of which created crackling noises, bright stray sparks, while, at the same time, providing the origin of their very name “bone-fire”, now generally spelled and often pronounced as bonfire.

The Midsummer’s bonfire was thought to increase fertility and produce luck, while passing through the flames of the fire was also thought to provide protection from both the fairies and the evil eye. Many accounts relate how cattle were driven through the flames between two persons who each held lighted sheaf of straw or reeds, known as a “cleer”. Members of the household also jumped through the fire, as did lovers who held hands in the hope of encouraging their own fertility. In County Cavan, a century ago, it was still believed that if you ate your supper by the fire on Midsummer’s Eve you would be protected from hunger throughout the coming year, while farmers often spread a sod of turf, coal, ashes, or even holy water on their crops as a method of protection from diseases including blight on Midsummer Eve.

Games and amusements were performed by many who attended, caps were often grabbed from unsuspecting heads and thrown or, at least, pretended to be thrown in the flames by the more boisterous members of the community. Spectators at the bonfires also fashioned bundles of reeds or straw which, when lit, were waved through the air, and in some places including Belmullet in County Mayo sods of lighted turf where thrown to the sky in the belief that the air would be purified through the motion of these smouldering sods. Additionally, a lighted piece of turf or a coal was often taken from the bonfire and carried home to relight the hearth in the household, which according to many accounts, was annually quenched on Midsummer’s Eve.*

*It is worth mentioning that quenching the fire on Midsummer’s Eve was only observed in some localities, as there was a strong tradition in many parts of Ireland of keeping the hearth fire burning continuously for years, or even decades, on end.