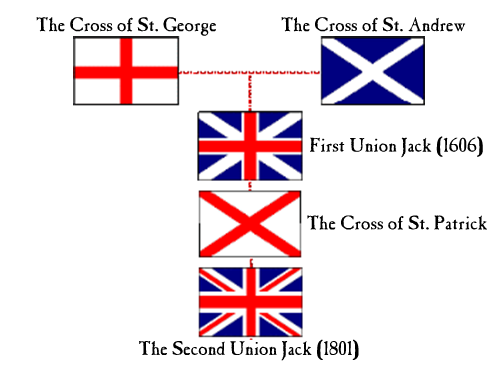 The Evolution of the Union Jack

First, have you ever heard the phrase that ‘history is written by the winners to justify what they did to the losers?’ That was a common saying by professors at the University of Minnesota when I was majoring in history some decades ago. One of the most vehement proponents of this and the need to look at the records from ALL parties in an event and independent observers, when they exist was Professor Bernard S. Bachrach, a senior specialist in medieval-Renaissance European history. He regularly reminded his very large, popular classes, that the winners were also inclined to bury and forget any wrongs that they did.

Let me ask American readers, or students of general American history, this. Have you ever heard of the pillaging and burning of the town of Osceola, Missouri on September 22, 1861–before Missouri even tried to secede from the Union–and the raid led by a Republican Senator who also, while a Senator got himself made a Brigadier General by Lincoln, in strict violation of the Constitution, and then commandeered a Union army regiment (with a cannon or two) to merge with his 1,500 drunk Kansas volunteers? Did you know that this Senator, Jim Lane, came from Lawrence, Kansas? You’ve probably heard of Lawrence, Kansas and its burning and the rounding up and killing of 150 men and older teen boys–and read about it as though it was an act out of the blue by those ‘terrible, barbaric slave-owning Missourians’. You were never told that the events at Lawrence, Kansas occurred almost exactly 2 years to the day after the pillaging and burning of Osceola, and the murders by various means of over 150 of that town’s citizens, men, women and children and that another larger number died from wounds and burns in the next few weeks. Osceola was tied for third largest town in Missouri with Independence and Osceola up until Sept. 22, 1861, was the actual jumping off point for the Santa Fe Trail. It’s not an event of the Civil War covered in the usual high school or even most college American History 1A textbooks. Can you imagine why not? How about the explosion that destroyed the Sultana taking 2500 troops home to the North and the corners that were cut by Union army and private company officials on the cracked boiler and ignoring the rules of passenger load? The person most responsible for this disaster had been a brother of a major campaign donor to Lincoln who had misbehaved as a quartermaster for the Union army, depriving Union troops to line his own pocket and transferred to lighter duties at the end of the war where it was assumed he couldn’t do any further damage. Now why would you NOT have known two major events like this? Who won and who has been writing the history books, or authorizing and approving them ever since? What do most people, including the people in governments, want to believe and project about themselves?

The ‘Acts of Union’

The Acts of Union of 1707: Scotland’s ‘shotgun marriage’ with England creates the ‘United Kingdom’

We recently (March 2020), received an email about the Act of Union of 1707 between England and Scotland. The writer could not believe the English had massed troops on the border of England and Scotland and threatened to invade if the Scots parliament did not vote for the latest of the two proposed Acts of Union. He was adamant that the Scots would have never tolerated this and voted for the Act. He noted he’d been looking for sources of my assertions in English/UK sites.

That being said, why on earth would you expect much cooperation from many English-UK sources on the question of what was actually done to influence Scotland–including calling up troops and threatening to send them to Scotland on more than one occasion to get the Act of Union paid for by Queen Anne and the English passed?

Here’s one of a few websites I’ve found over the years that contradict the silence from many (though not all) English sites on the Act of Union. This item, from the Scottish newspaper ‘The National’, mentions the threatening mobilization of English troops to cow the Scottish parliament and urbanites in Scotland, more than once, and cites who was behind the action and who did the subsequent actual calling up of English troops.

I realize the writer was employed by ‘The National’, a Scottish newspaper that boasts it supports Scottish independence, so some could argue, well, this writer is also biased. Then we could have an argument as to whether Scots or English bias is acceptable, or more accurate.

However, here’s a second non-newspaper article used in schools, and it was published in the UK–by the official UK Parliament website. It’s quite long and segmented, but the truth of the matter is there for you to read in several segments if you take care to spot it. It’s not a separate article with a headline in which the English are bragging, ‘Yes we massed our troops on the English-Scottish border and threatened Invasion in 1706!’ To help you, I have given two links here–one to the section that specifically mentions troops being put under the Queen’s advocate, the Duke of Queensberry, and the beginning of the whole group of articles explaining all the chicanery.

Remember, this also, and there are plenty of articles about this, Scotland had NO army at this time. The clans were responsible for their own men, weapons, etc.–which is why they had such problems in the 18th century as ammo that didn’t fit all guns, cannonballs that didn’t fit cannons, etc. Read any of the numerous accounts of the battle of Culloden to learn how well that didn’t work out. This problem was already understood and known by many of the Scots lords and clan chiefs by the time the Act of Union was being negotiated. In fact, one said, reflecting upon these very circumstances, ‘Scottish independence already exists in name only.’ Only the English had a national army under the monarch and parliament. Thus the troops ‘put under Queensberry’ were ENGLISH troops and he himself was taking orders from Queen Anne and the English parliament. He’d already sold himself.

The following are links to two sections in this article on the UK Parliament website mentioned above. The article is titled: ‘Living Heritage: Act of Union 1707.’ Pay attention to all the segments of the article listed in the margin on the left of the first page of the second link, as all the chicanery and pressures are described in detail in the whole of the segments together. The first link specifically addresses the use of troops, the second link takes you to the top of the article.

Note that despite the separate origins of both articles, there are a number of points that are the same, just stated a bit more strongly in one and more softly in the other. One point is that yes, the English massed troops on the border to help ensure passage.

Another shorter version of the above total article also appeared years ago with Electric Scotland–I haven’t checked to see if it’s still there, and there were two other sites one related to the Scottish parliament, and who voted for the Act and why, the three major parties/factions and who didn’t and who was over time persuaded the faction in favor of the Union finally ensuring passage. I had originally found those when I was researching the baronets of Auchinbreck, a minor, but colorful Campbell line from which I distantly descend. I have far more Loudon Campbells. In 1698, just before the crucial negotiations and votes regarding the Act of Union, Sir Duncan Campbell, the 4th baronet, turned Catholic and had to resign his seat in the Scottish parliament, turning it over to his young, still uncertain what he wanted to do politically, son, James Campbell, 5th baronet). The 5th baronet was a member of the Parliament at the time of the two proposals and related votes. He was initially against the Act but later voted for it. He was generally described as one of the moderates who took extra time to be persuaded. Apparently he soon regretted his vote. He then joined the Earl of Mar’s rebellion in 1716. His paternal grandmother had been a sister of the Thane of Cawdor and it was Cawdor who urged him to join his own grandsons at Islay to raise Cawdor’s standard and the men of Cawdor and Auchinbreck for the rebellion. Auchinbreck ended up unable to fulfill his promise because he was checked on both sides by men of the Duke of Argyll and Earl of Loudon who effectively ‘penned him in.’ The 5th baronet of Auchinbreck’s second son, James, then participated in the Glenshiel rebellion in 1719 and ended up in permanent exile in Spain. As many probably know, Auchinbreck was then one of the thirteen lairds and lords who signed and sent the letter to Cardinal Fleury inviting Bonnie Prince Charlie to try his luck in 1745. After Culloden, Auchinbreck was arrested and investigated, and spent a year in Dumbarton Castle prison, under his more distant cousin of Argyll, and then the rest of his life largely under a kind of house arrest at Lochgair and constantly watched. Most of his estates that he hadn’t mortgaged and then had to sequester when he couldn’t make payments, to back the ’45 rebellion (after already losing a bit in 1716–hence his marriage to the Lort heiress, his cousin by Cawdor in 1717), were forfeit for his acts of rebellion.

Yes, I looked into the Act of Union quite thoroughly and how it came about and the role of one my ancestors in it. I thought he was a bit weak and a bit of a weasel in 1707, had a bit of a case and some honor, but not a lot of sense to realize his nearest larger north and south neighbors Argyll and Loudon were not on board, in 1716 but had definitely lost his mind by 1745. I can now understand why his long suffering third son, Gilbert, who handled much of the family business took off for Virginia after 1719!

So, yes, the English did use the threat of troops and had them already called up and massed on the border ready to go. The members of the Scots parliament were at odds with most of their own people who felt by 1706 they had not been heard and represented. At the same time, from the English view, all the money going to the Court party in favor of the Act of Union was about to be wasted if the ‘mobs of people’ prevailed upon their parliament to really represent their interests.

The whole of the lengthy UK Parliament article goes into much more detail about the back room politics, the bribery, and even the sabotage by William III using, in part, his command of the English Navy, of the Scots Darien Expedition which had attempted to create a two ocean trading colony of Scots in Panama. That event is what made the Scots lords, lairds and some merchants in particular so vulnerable to financial incentives by the English later. The Scots were set up for failure and didn’t foresee the likely English actions–both in response to the Darien expedition and then the pressures for Union. The whole story is very unsavory, but at least someone associated with the UK Parliament had a great sense of fairness and appreciation for truth and published it–even if it is a bit hard to find.