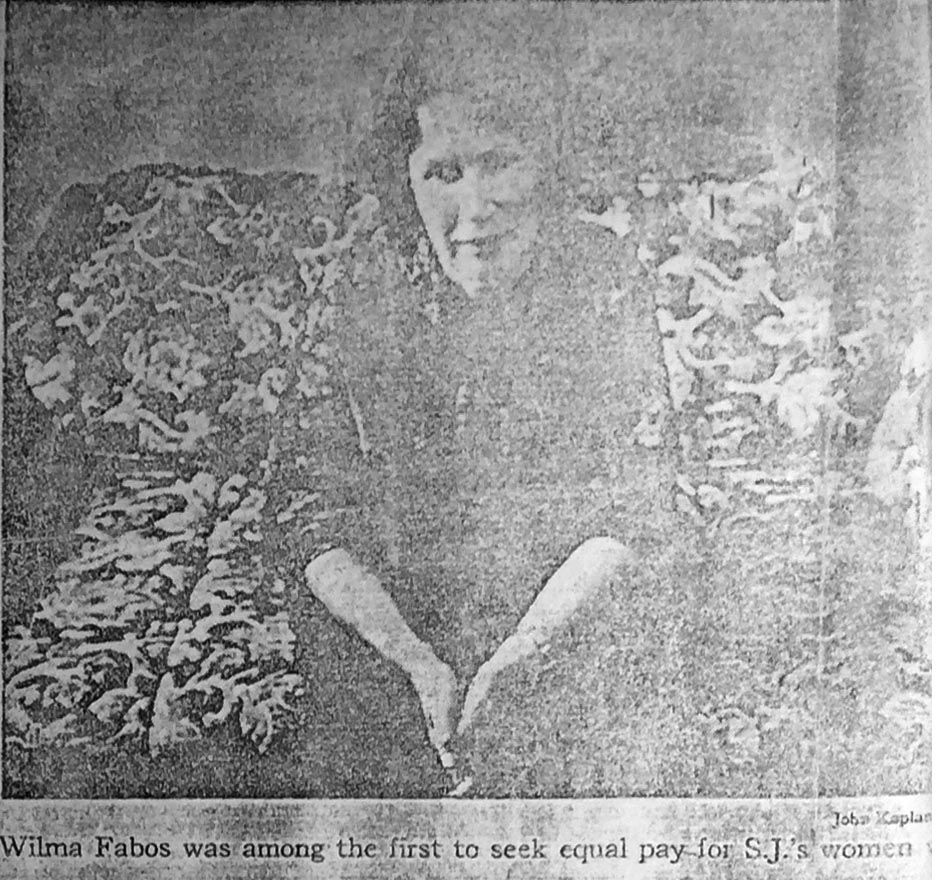 July 1-9, 2021 is the 40th anniversary of the first strike in the U.S. on the basis of ‘Comparable Worth.’ It led to legislation in many states and ultimately federal legislation that elevated the average wages and salaries of women and increased parity with white males. Parity, for the first and only time since the industrial revolution, increased to nearly 80% with what white males in the same positions, or positions requiring similar education, skills, etc.

Except for a few column inches mention in Sal Pizarro’s 7/2/21 column, this seminal San Jose event has been largely forgotten.

The strike was in the City of San Jose, against the City of San Jose, by its female and minority workers in its largest union. It was organized and partly led by Wilma Maie WALLACE-Fabos (1922-1987). It is interesting to also note that five of the city councilpersons were women and some voted against the wishes of the female and minority workers. In fact, Wilma was threatened with arrest and jail by the then City Attorney–at the behest of the Mayor, City Manager and Council majority. She had an away bag packed, ready to go to jail the entire time of the strike, according to her husband. 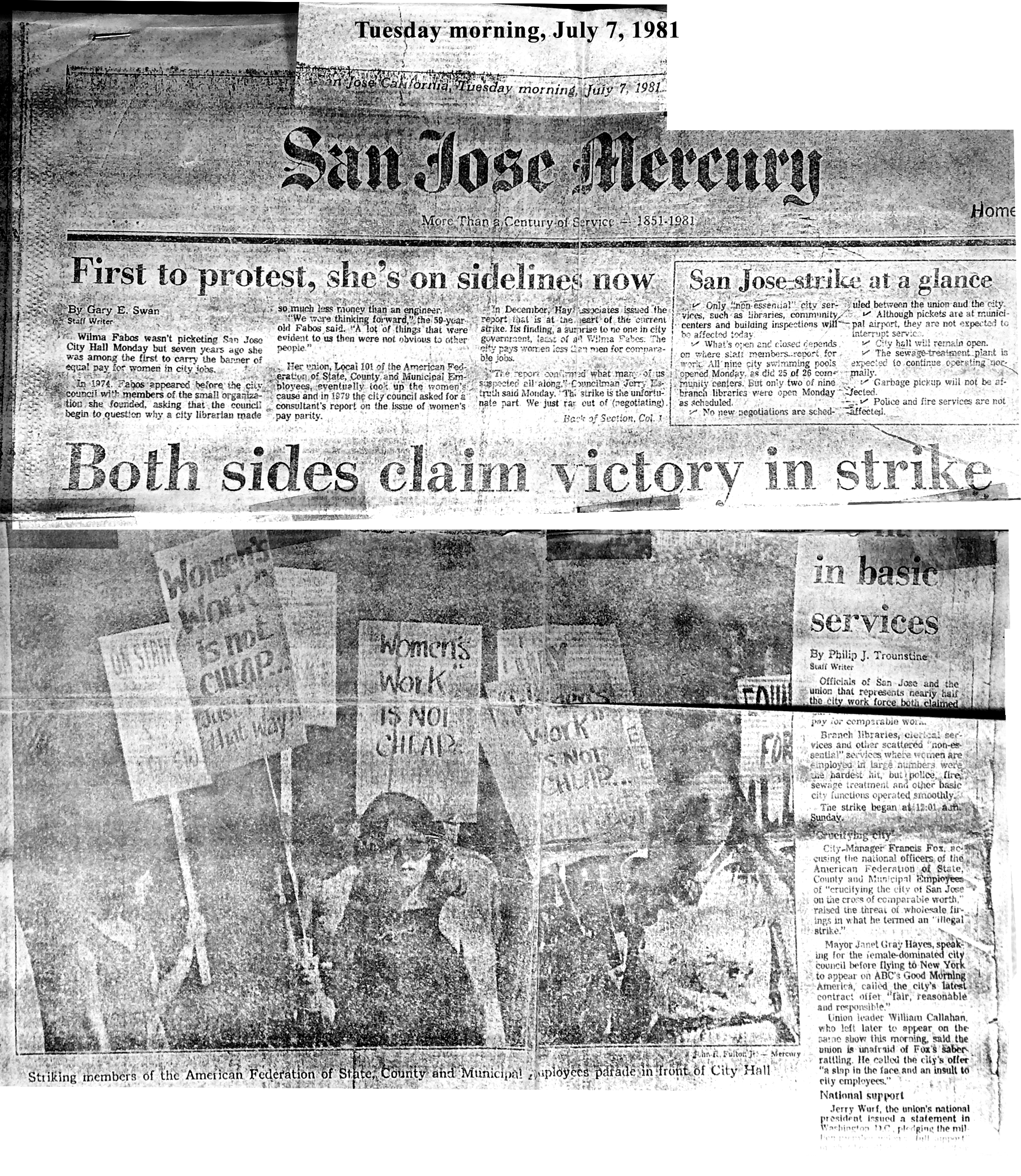 Wilma Maie Wallace was the 5th and last child and youngest of three daughters to a Missouri couple who had not wanted five children. Her mother often complained to anyone who would listen, including her sister and grandchildren that she had not ever wanted five children and said she had also wanted no daughters. Wilma grew up alternately abused and neglected by her mother, and her step father and oldest brother. Her father, William Thomas Wallace (1880-1945) was kindly, but weak and worn down by his wife Jessie Lavinia Collins (1892-1989) and the Great Depression and abandoned the family when Wilma was but 12 years old. By the time she graduated from high school, Wilma was determined to make something of herself and prove her worth in a world, and even a family, where abuse of women and girls was common and legal, and, outside of the home, women had few opportunities for education, jobs, advancement and income, where women in many states who did work saw their paychecks given to their husbands or fathers, or oldest sons, and could not own land in their own names or have credit in their own names. She was born only 2 years after women had been given the right to vote–and most still lacked the education to vote intelligently. She served in the U.S. Navy throughout World War II, including in China, and more, and at the end of the war, in Naval Intelligence, Unit 14 at Pearl Harbor. Wilma saw few veterans’ benefits or acknowledgments until late in her life, but when she died of ovarian cancer in November, 1987, she was buried with military funeral honors at the Golden Gate National Cemetery in San Bruno, near the flag. Her husband, John, served in the U.S. Marines, 5th Division, including in the V Amphibious Corps (VAC), in the Japanese Islands Campaign, and was interred next to her. These were my parents.

She was a junior descendant of Samuel Wallace Esq., a merchant and sea captain as part of his business, and his wife Elizabeth Woods who had been preparing to emigrate from County Down, Ireland in 1725 when Samuel died. The widow and children emigrated along with a brother of hers. Samuel Wallace, Esq. was one of the youngest sons of Sir William Wallace, knight gentleman, third son of the laird of Failford in Ayrshire, Scotland, who had, after being knighted for services to Charles II, acquired land in Ireland. One of Samuel’s first cousins, the oldest son of the oldest uncle, became Baron of Craigie. There was never a Jacobite cause or Stuart king that the Wallace’s had not supported, with mixed success, and a lot of suffering. Wilma, essentially, followed that tradition. Fortunately, after a lot of suffering, she enjoyed success, rather like her Failford ancestors in the 17th century.

Sadly, some of the gains of the 1981 strike and subsequent legislation have been lost over the years. It’s long been more convenient to raise incomes on a flat percentage basis, which perpetuates inequalities, rather than creating tiers and raising up the bottom more with cents or dollars per hour increases that are greater than the increases for already better paid classifications. Additionally, comparable worth has yet to be applied to or enforced in much more than public employment. Silicon Valley technology companies mostly have a token female board member, and a few token secondary executives in positions that have little to do with the overall direction of companies or decision making for products and/or services. Women are generally not asked their opinions about anything by government or business excepted in loaded polls designed by men to get the answers they want to hear or read. Professional consulting companies have as few women, especially in overall company decision making positions as manufacturing and technology companies. When you look at government, at the Hollywood film industry and more, you see more of the same.

Women are more than half the U.S. population and more than half the population of every state, county and city, but they are not half of any state legislature, and few city councils, county boards of commissioners or supervisors, and not half of top executive positions in business or government. They are no less intelligent, or educated than men, just less powerful because those in power rarely give it up voluntarily and tend to prefer to replace themselves with others just like them, unless forced to do otherwise. White males tend to replace themselves with other white males, and use different standards to evaluate candidates of the two different sexes, and even races. For women it’s often ‘what have you done.’ For men it’s ‘what is their potential.’ Past discrimination has been used to continue discrimination and repression in the present and into the future. It has also limited what women can contribute to Social Security and Medicare–despite the fact that housing, groceries, utilities and health insurance and health care all cost the same for men and women, and clothing and shoes often cost MORE. It’s long been believed that if a job can be done by a physically weaker woman it is not worth as much and should not be paid as much. Childcare, nursing and elder care and the low salaries and wages that have long been associated with these are classic cases of these long held prejudices in action. It’s also why women can be and are expected to hold paid industry and government jobs and still somehow raise the children, care for the elder parents, and sick spouses, and clean homes, do most of the cooking, etc., etc. Women are all expected to be superwomen–unpaid and men, well, they can do the few more important things. Worse, we condition all of our children, male and female, to vote according to these prejudices.

Wilma understood this, which is why she tried to achieve evaluations for all using the same standards and to raise the bottom where women and racial minorities were most often to be found. There needs to be a few more Wilma Wallace’s. Wilma had a different perspective and from several of the men in her life, had a much more realistic view of strengths and capabilities of the two sexes. She once cynically said regarding strikes by female workers that they worked if you grabbed the attention of those in power by their wallets. Paraphrasing Lyndon Johnson, she said, ‘grab them by the wallets–then the minds, hearts and the you-know-whats (she was something of a lady as she was raised in a southern family) will all follow.’

Here are the original articles about the 1981 strike and Wilma’s role in bringing it about, and achieving a successful conclusion. Bear in mind, it was one of the few major strikes in U.S. history that actually had gains for its workers in the first year, as it was concluded in 9 days and the strikers had used paid days off and sick days,, picketing in rotations, so the financial suffering was minimal. They used as few picketers as possible, only about 120 persons total, but targeted areas the voting citizens would notice most. Wilma had learned a little military strategy in WWII. Additionally for more biography of my mother and other strong ancestresses of hers, see the ebook I wrote, Ancestry and DNA: Beyond the Basics, available through the AmeriCeltic.net website. Free to those who really can’t afford even the modest $10 requested. Just send AmeriCeltic an email and we’ll send you a download code.